Last Saturday I took a display to the Brighton Science Festival with the Friends of Shoreham Beach Local Nature Reserve. This was a joint display depicting various aspects of the Nature reserve and local dolphin and whale sightings for the Sea Watch Foundation (for whom I am the Sussex Co-ordinator). As Sussex country recorder for Sea Mammals and Sussex Regional Coordinator for the Sea Watch Foundation (SWF) I represented the SWF with a display about Sussex whale and dolphin sightings. As a member of the management group for Shoreham Beach LNR I helped represent (with the help of members of FoSB) the nature reserve.

The Friends of Shoreham Beach (FoSB) display explained why Shoreham Beach had been made a Nature Reserve (because of its rare vegetated shingle habitat) and the work of the FoSB. 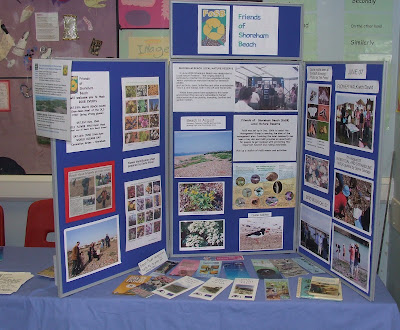 The FoSB display also included an exhibit about marine litter. This consisted of a variety of litter items cast ashore by the tide which were tied to a piece of fishing net (also marine litter). Each label had a tag with information about how long it takes each item to biodegrade.
There was also a display that I had worked on (based on te outraech work I had done with local schools earlier in the year) which depicted elements of coastal geography. 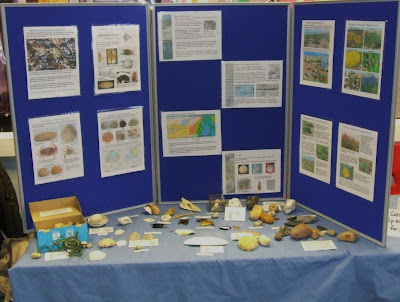 This looked at how the local coastline was formed and how it is shapeed by natural forces. This included how chalk and flint were formed and how the shingle beaches contain flint scoured from the chalk and deposited on the coast after the last ice age. Some are the result of more recent coastal erosion. The display also looked at vegeated shingle; the animals that are attacted by this habitat, how the plants have adapted to live in this harsh environment and the threats this habitat faces. These was also information about strandline objects and some examples that could be handled.

The main focus of the Sea Watch Foundation display was a life sized bottlenose dolphin, the species most frequently seen along the Sussex coastline. 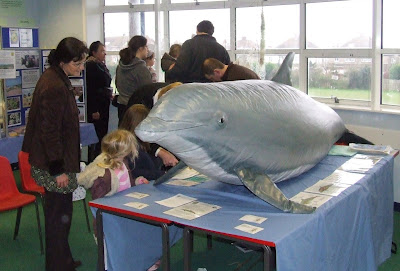 Infomation about local dolphin sightings (including pictures) were displayed down the left side of the display while the right side provided information about dolphin natural history. There were also some fact quiz questions. 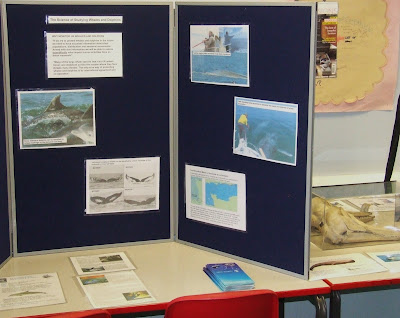 The remainder of the display looked at the science of studying dolphins and whales focusing on photo-identification (recognising individual whales or dolphins) , DNA sampling and satellite tagging whales to study migrations and populations. We also displayed a dolphin skull, sperm whale tooth, baleen killer whale vwertebrae (all on loan from the local Booth Museum of Natural History in Brighton. The event was well attended and there was a lot of interest and divese questions.
Posted by Steve Savage at 07:01 No comments:

Took a trip to the Shoreham beach yesterday with my daughter to collect some pebbles for a coastal display that I will be running for the Brighton Science Festival on Saturday 23rd February. I started at the footbridge, crossing the River Adur. The tide was on its way out and there was a lot of bird activity. Apart from the various gulls, a large flock of grey plover were feeding on a small island of estuary and mussels. 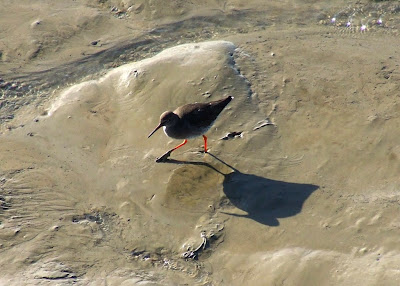 On the mud flats on the far side of the river there were several redshank feeding. Redshark have relatively long legs and stride over the soft mud probbing every now and then with their long beaks. The display will be mainly about the Shoreham Beach Local Nature Reserve and will also be run by the Friends of Shoreham Beach (FoSB). 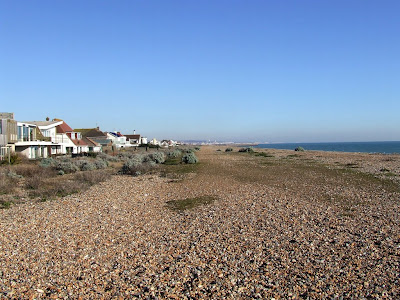 This is an exciting new nature reserve established in June 2006 and which I have been very pleased to have the opportunity to be involved with both as a member of the management group and as a honary member of FoSB.The beach is comprised of a large shingle spit, formed as the result of several centuries of wave action and westerly deposition of the shingle - Longshore Drift. Above the tide line, where the shingle is stable, is vegetated shingle, a rare habitat for the UK and worldwide. The shingle plants die back during the winter ready for a dramatic transformation in the spring when the plants will burst back into life. 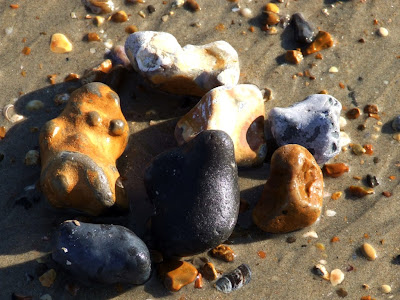 Anyway, more about the shingle. People often this that the shingle is boring but it is infact very interesting. 98% of the pebbles are flint washed into the English Channel at the end of the last ice age or have been left behind as the chalk coast eroded in more recent times. 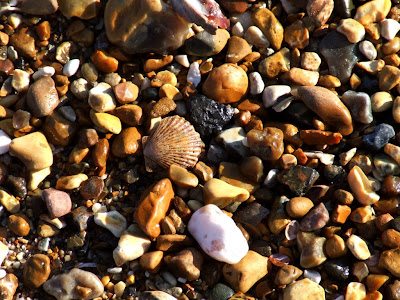 In amongst the flint are various other pebbles from inland also washed down when the ice thawed. There are also pebbles left over from the large rocks used as ships ballast from the 13th Century until about the 18th Century. 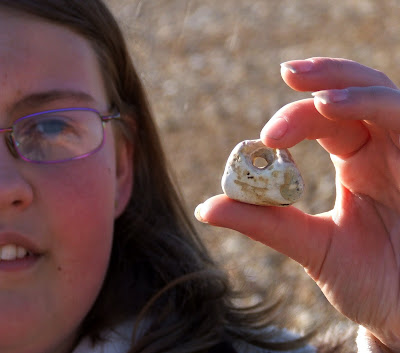 Pebbles with holes, like the one above, are known as hagstones. They were once worn to protect the wearer from witches. They were also tied around the neck of cattle to prevent witches from riding them off to their secret meetings. Large pebbles with holes were tied at the bow of fishing boats to protect them from witchcraft.
Posted by Steve Savage at 03:08 No comments: