Another bottlenose dolphin sighting. The dolphin was seen off Lancing/Shoreham (West Sussex) yesterday (Monday) at about 2.30pm.
This sightings was also made from a vessel about 1.5 miles off the coast and may have been the same dolphin as yesterdays report (as this sighting occurred a few miles west of yesterdays sighting).
Posted by Steve Savage at 06:02 No comments:

A solitary bottlenose dolphin was observed off Brighton yesterday at 7.30 pm. This sighting was made from a vessel about 1 mile south of the Brighton Marina. Sightings along the Sussex coastline have been quite poor so far this year.
Posted by Steve Savage at 06:12 No comments:

World Oceans Day
In June 1992, over 150 Heads of States signed the Convention on Biological Diversity at Rio de Janeiro. They did so to express a shared belief that action must be taken to halt the worldwide loss of animal and plant species and genetic resources. World Oceans Day was first declared as 8 th June at the Earth Summit in Rio de Janeiro in 1992. Since then, events have occurred on or around this day all around the world. 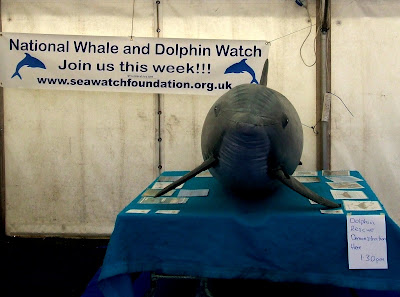 I took a sea mammal display again this year. This year it was made up of 2 main themes, the inflatable dolphin and local dolphin and whale sightings and the seal tagging project included on this weblog. 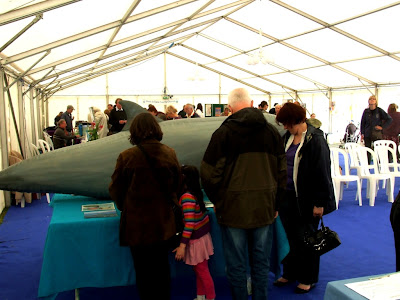 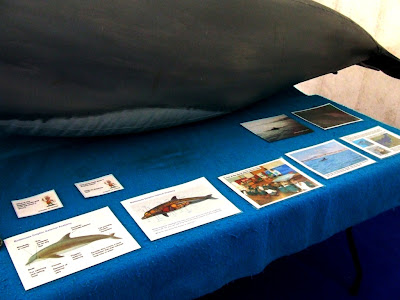 The life sized inflatable bottlenose dolphin represents the species most commonly seen in Sussex. The display included biological information about dolphins and information and pictures of local sightings.

We also had a static display including a dolphin skull, whale vertebrate and a sperm tooth. 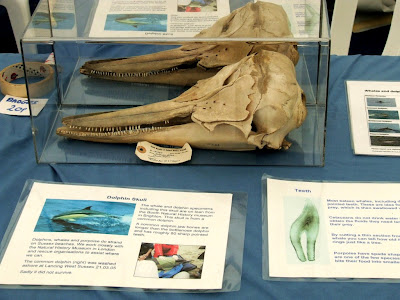 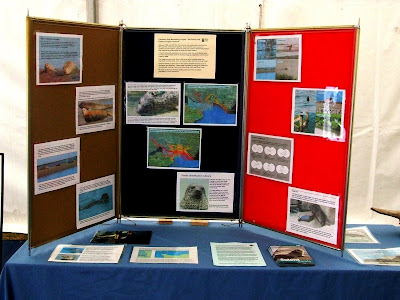 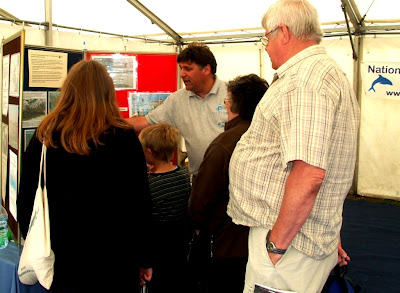 I also presented a dolphin rescue re-enactment demonstration with participation from the audience. 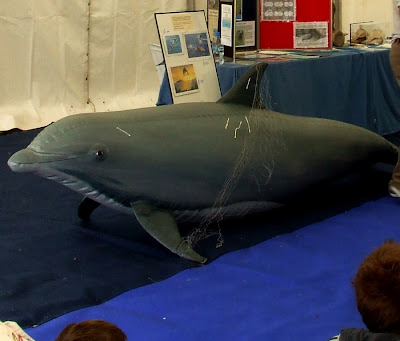 The scenario for the stranding was a dolphin entangled in a piece of old fishing net. The children were asked to suggest what we might need to do to provide first aid for the stranded dolphin and volunteers helped in the demonstration. 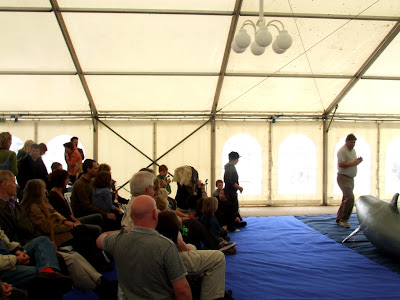 It was decided the first thing we needed to do was to check the dolphins breathing to see if it was a live. The breathing rate should then be monitored to see if it speeds up or slows down, a sign that there could be a problem. 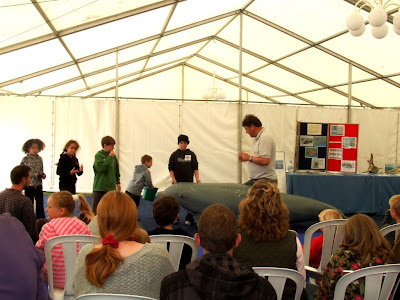 Dolphins have blubber that reduces the loss of their body heat when in the sea. A stranded dolphin can easily die from heat exhaustion so a row of 4 children keep the dolphin wet and cool with buckets of water (not real water of course). Dolphins control their body heat by loosing heat through their tail and fins. Water poured onto these can also help to cool the dolphin down. 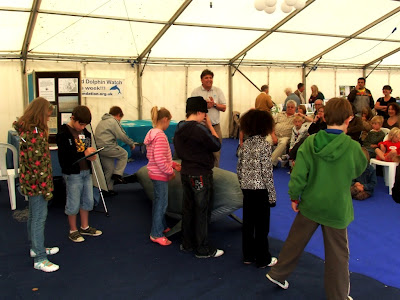 Dolphins can also die from the effects of gravity, so another volunteer dug holes around the flippers to help alleviate this problem. Two volunteers filled in the stranding form and identified the species from an ID chart. 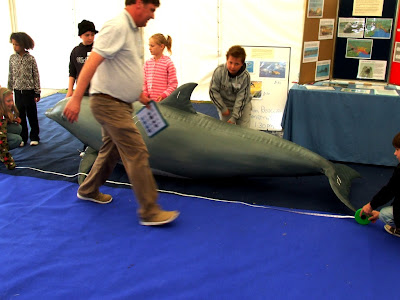 Other information was recorded such as injuries and natural markings, and the dolphin was measured. 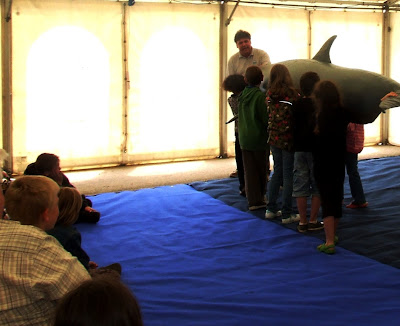 The dolphin was returned to the sea, the volunteers walked the dolphin around until it could swim under its own steam. Back on the display stand, we answered many questions about dolphin strandings and the problems of marine mitter - especially plastic.

There were also many other very interesting displays including 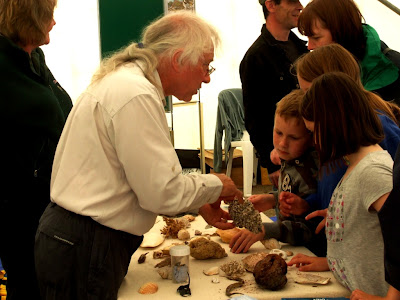 The county rangers presented a fascinating display about the various shells, bones and egg cases that wash up on the beach 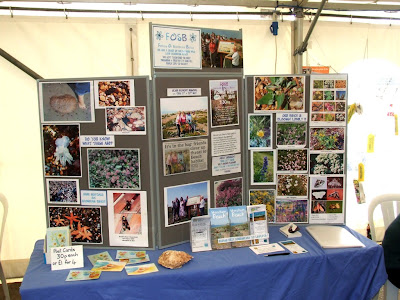 The Friends of Shoreham Beach Local Nature Reserve (FoSB) display depicted the rare vegetated shingle beach habitat on the nature reserve and a display about marine litter and the threats to wildlife and the environment. 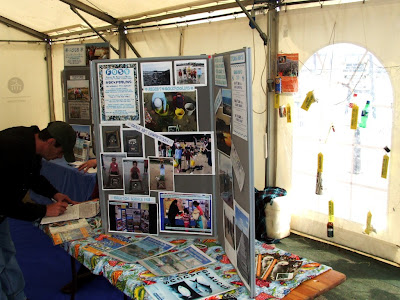 The British Marine Life Study Society had several displays where you could come face to face with a variety of marine life. 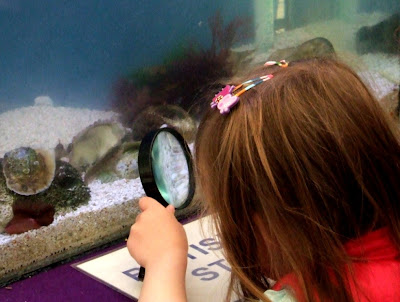 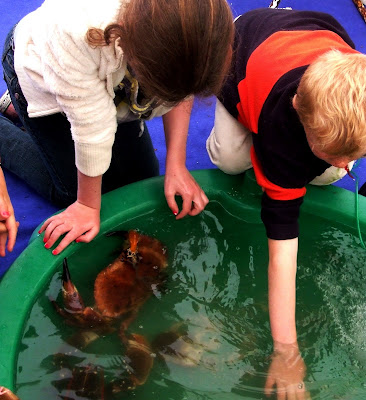 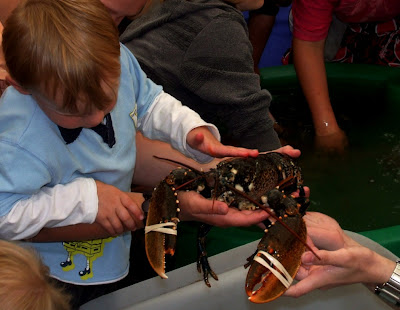 There were also various experts on hand to answer questions.

It was a great day with much interest and lots of questions from both the adults as well as the children.