I have just heard, via the Sea Watch Foundation that another porpoise has stranded at Worthing, on Sunday 21st December. The porpoise was fairly decomposed.
Newpaper article "Lancing Herald" regarding the previous pospoise stranding discussed in my earlier entry. 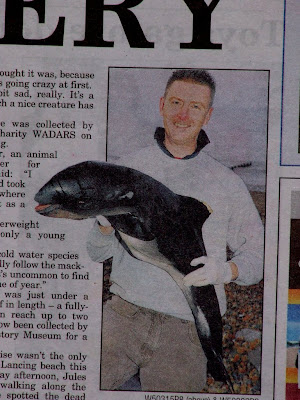 Posted by Steve Savage at 09:20 No comments:

Following the recent storms, large number of dead and dying starfish have been washed up on local Sussex beaches along with other animals inlcuding crabs and dogfish. I have had reports from the Shoreham Beach Local Nature Reserve and Worthing Beach. The strandings at Worthing included a harbour porpoise. The report came initially from a local animal rescue charity WADARS via the Sussex Wildlife Trust. The porpoise was estimated to be able 1.7 metres and was very emaciated.

Initially it was thought the two events were not related, as winter storms can wash ashore large numbers of all sorts of small marine creatures (such occurred locally back in March this year). Since then it has been suggested that the porpoise and other marine animals at Worthing may have been the result of a trawl. The remains of the porpoise was picked up by the Natural History Museum in London and I hope to receive an official report on the cause of death.

While porpoise are not common in the eastern channel in winter they are occasionally observed, for example a pair of harbour porpoise were reporetd at Hastings (East Sussex) in January 2007. Over the years we have had the occasional winter stranding of porpoise off Sussex, in one year a baby porpoise with the umbilicus still attached.
Posted by Steve Savage at 05:37 No comments: