I have just recieved a report, via the Sussex Wildlife Trust, of a seal that was spotted in the River Ouse just above Lewes. The seal was seen on Wednesday the 19th November at about 4.00pm. I spoke to the lady who made the observation and it appears likely that the seal is a common seal and quite possibly the seal reported earlier on Peacehaven beach.
Posted by Steve Savage at 06:30 No comments:

More on the Peacehaven Seal

Bills first sighting of the seal was at 2pm as he was cycling along the Peacehaven undercliff promenade on 31st October. It was a warm sunny afternoon with calm sea and the seal was basking on the groin as you can see below. 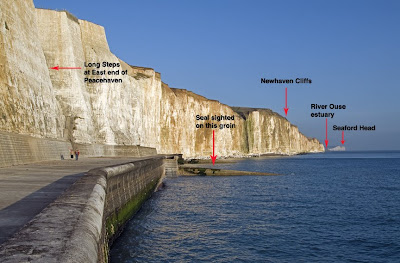 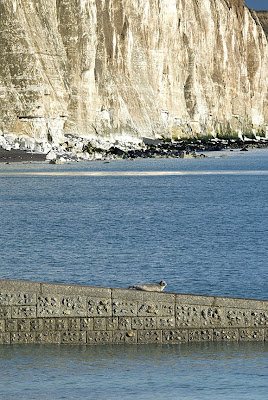 It seemed to be in good health and condition, with no sign of injury or distress. Bill took several pictures with a long lens from the promenade, the seal simply turned to keep a wary eye on him, making no attempt to go into the water. (see below) 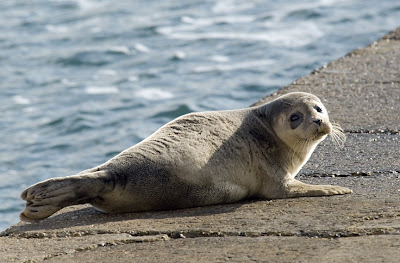 Seals have an oily tear that runs across their eye to protect it against the salt water. This makes them look like they are crying, when they are dry and hauled out on the beach 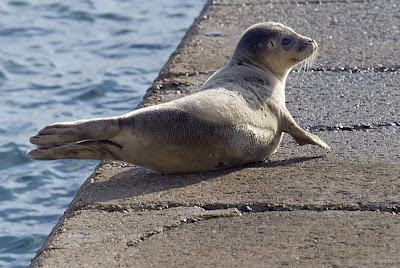 Flipper waving, a friendly warning not to come any closer. 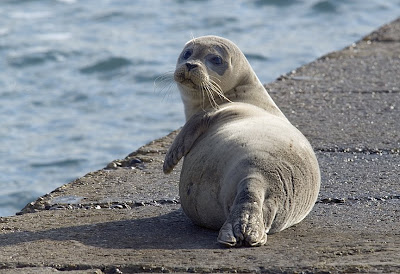 Looking at this photograph I am almost certain that the seal is female. Bill managed to measure a section of the groin shown in the photograph and we were able to estimate that the seal was about 1.2 metres. Female common seals are 1.2 to 1.7 metres and males 1.4 to 1.9 m, so it is probably an adult or young adult female.

The following morning was overcast and drizzly and Bill checked for the seal from the cliff top at about 11am on Nov 1st. To his surprise it was still there. The seal seemed more cautious today and slipped into the sea which was right up to the groin as it was high tide. It popped up a few yards offshore then dived again and appeared a hundred yards or so offshore, where it stayed for the quarter of an hour or so that Bill was there. It did occasionally dive for some lengths of time so it may have been feeding.

When Bill went back the following day it had gone and he hasn’t seen it since. In Bill's own words, a fascinating first encounter with a sea mammal in the wild.

If you would like to see more spectacular pictures of the coast, visit Bill Carters website at
http://www.carterphotographics.myzen.co.uk/
Posted by Steve Savage at 12:37 No comments:

A young seal has been reported off the Sussex coast at Peacehaven. It has been around for a few days.
Posted by Steve Savage at 10:23 No comments: