The second day of the conference focused mainly on renewable energy such as offshore wind farms and wave energy. This included a presentation about the planned wind farm off East Sussex. There was also a very interesting talk from Bournemouth council about the artificial reef.

The rest of the day was taken up by the ecology tours the Shoreham Beach Local Nature Reserve. The following is an overview of the tour I led. 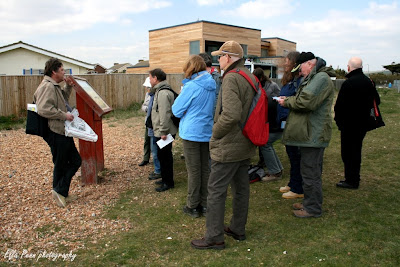 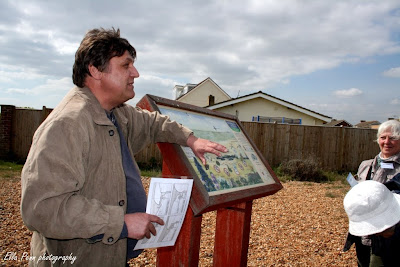 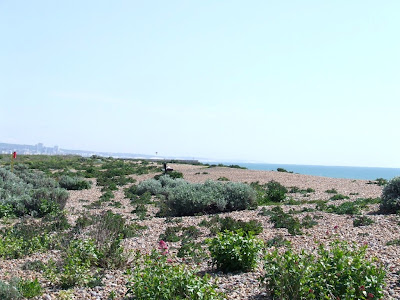 A view of the vegetated shingle as it will be in the summer
During the winter months many of the plants die back beneath the shingle and reappear in the spring. This is a useful adaptation to avoid the worst of the winter storms. The sea kale was most evident, but we also saw biting stone crop, bittersweet, curled dock, sea beet, tree mallow and a single yellow horned poppy plant. 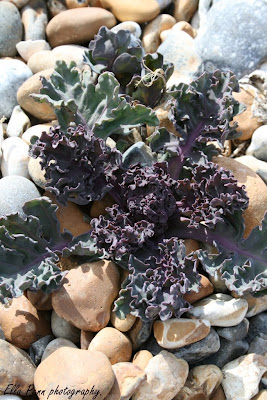 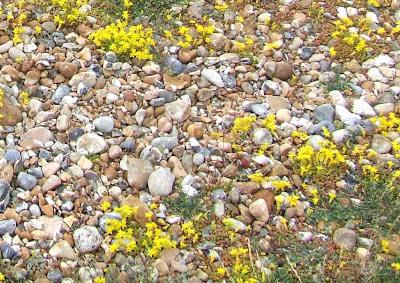 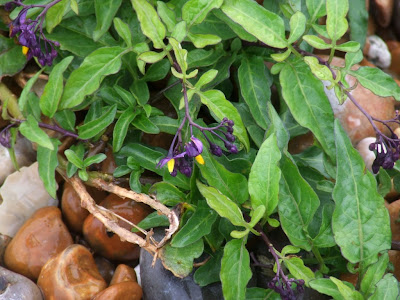 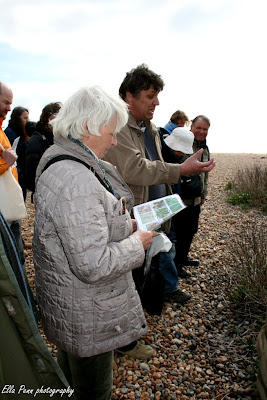 We looked at some of the features that allow these plants to survive in these harsh conditions. Waxy and hairy leaves to protect them against the drying affect of the sun, wind and sea spray. Long tap roots mean shingle pants to reach freshwater below the shingle and surface roots provide access to the small amount of nutrients near the surface. 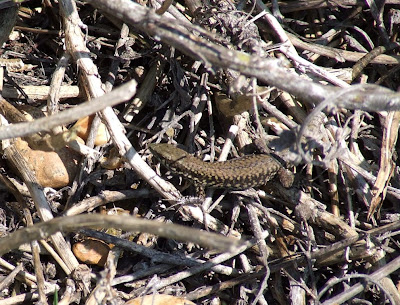 Common lizard
As the plants develop they will support a wealth of terrestrial birds and invertebrates. We did see a couple of common lizards scuttling across the shingle.
People often think of shingle as boring old pebbles. They are half right, most of the pebbles are flint which were formed at the same time as chalk – during the Cretaceous period when Sussex was covered by a warm shallow sea. 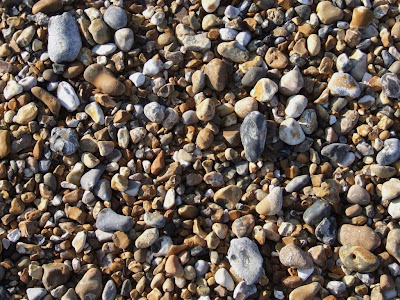 At the end of the last ice age, melt water scoured the softer chalk, created valleys, and flints and other pebbles were washed down to the coast where they now form shingle beaches. Even the pebbles have a story to tell. The brown flint has been coloured by organic matter before being washed down to the shore. The bigger, greyish flints eroded from the chalk in more recent times. Elongated flints formed in the burrows of burrowing marine life (when the chalk was still soft like clay) some formed around the dead remains of other sea creatures and hide a fossil deep inside. Pebbles with holes were created when flint formed around sponge. We also found some lignite (sea coal) created by the vegetation that grew in the channel when we were still attached to Europe. 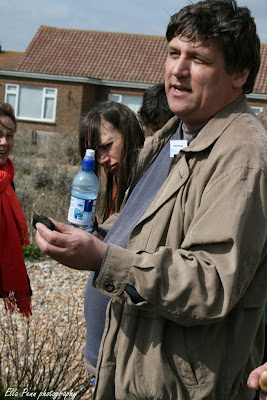 Demonstrating a piece of lignite
Having looked northwards to the South Downs and westward to the chalk cliffs it’s not too much of a surprise to realise that beneath the top layer of shingle is chalk
The beach here is actually quite new in geological terms. Along the Sussex Coast, the waves transport the smaller shingle ever eastwards, this is called longshore drift. With the help of the river Adur, which now runs parallel to the north side of the beach, before entering the sea at the harbour mouth, the Shoreham Beach we know today was created by longshore drift. In fact the Napoleonic fort remains that sit just to the west of the harbour mouth could only be built when the river mouth was stabilized by the first harbour arm built in 1820. Longshore drift constantly blocked the river mouth causing it to find an alternative entrance. Infact the river Adur has entered the sea as far West as Lancing Beach Green and as far east as the Lagoon in Hove. Shoreham has been important for many centuries for ship building (up until Victorian times) and as a Port which is just as important today. 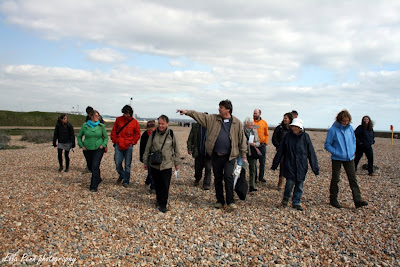 Another fascinating part of the beach is the strandline, made up of seaweed, sea shells, egg cases and all manner of curious objects cast up by the tide – including marine litter.

We found the egg cases of dogfish, ray and whelk. One of the most common shells, the slipper limpet, came across the seas from America on the shells of live oysters planned to re-populate the overfished local oysters. Slipper limpets often live in chains, all males except for the female at the bottom. If the female dies, the next male in line will change sex. 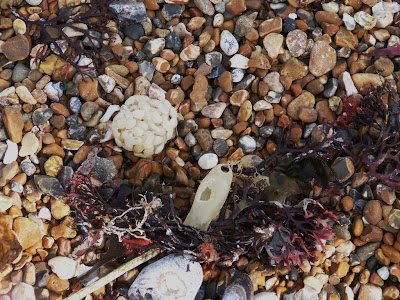 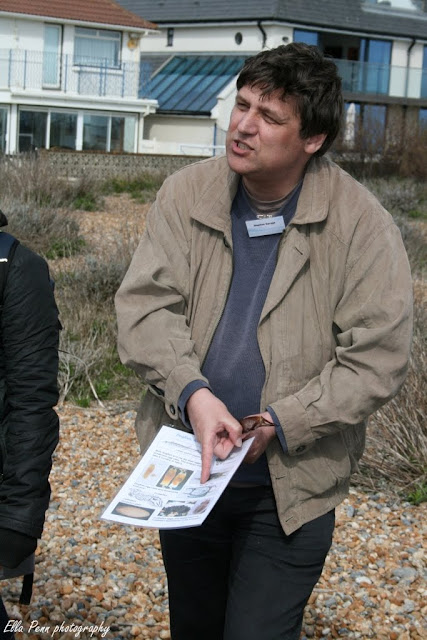 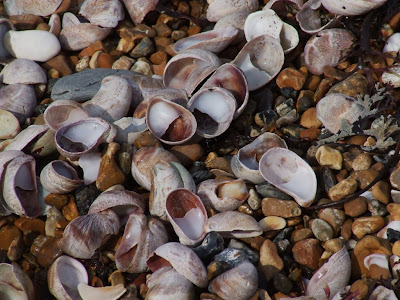 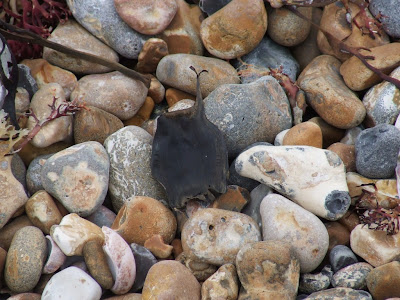 Ray egg case
Sadly, Shoreham Beach is also a good place to illustrate local and global threats. The vegetated shingle plants can be damaged by trampling, bonfires and by people removing the flowers or seeds. A major problem is over enrichment of the shingle caused by dog fouling and garden rubbish. The latter is a major problem as large areas of the shingle have been taken over by invasive species such as red valerian and silver ragwort. These plants can out compete the true vegetated shingle plants. The beach may also be in danger from global problems. Global warming – may cause sea level rise which could eventually flood the plants as they are unable to retreat inland because of coastal squeeze – the plants are tapped between the sea and the houses. More severe storms could also destabilise the shingle and it and the plants could be washed away.

Shoreham beach has a unusual blend of flora and fauna creating a diverse ecology and together with the coastal geography and maritime history, they entwine to tell a fascinating story of this piece of coast. (Also touching on themes discussed in the conference).

I spoke to the delegates briefly on the coach at the end of the ecology walks and they seemed to have enjoyed the afternoon, some mentioned it was a great end to the conference and many said they would return in the summer to see the beach at its best when the shingle plants will be in full flower. I gave each delegate on the tours a copy of the LNR leaflet.
Posted by Steve Savage at 03:57 No comments:

Here is some general feedback and pictures from the Sustainability Conference “The Evolving Seas” held in Brighton this year by Brighton and Hove Council. On day one, I presented an illustrated presentation about the dynamic and diverse Sussex coastline and the equally diverse local marine ecology. On day two, I ran one of the eco-tours to Shoreham Beach Local Nature Reserve. I also took along a display of my own One World One Ocean.

Day 1
The first day speakers concentrated on issues (in 20 min slots) including spatial planning, the coastal access Bill, Marine Conservation Zones, impact of climate change on our local coastline, coastal erosion and the Brighton Marina. There was also a presentation from the Blue Gym (the original co-founder of surfers against sewage) and my presentation on local marine ecology. 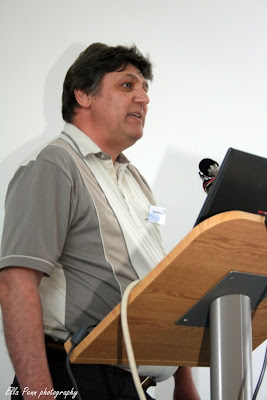 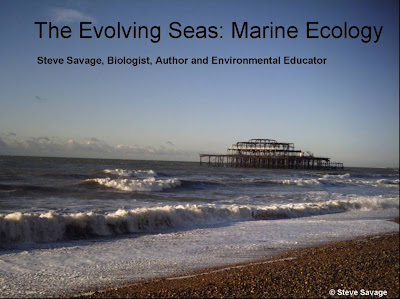 It’s a bit of a challenge to sum up our marine ecology in only 20 minutes and do it justice, so I went for very visual. My PowerPoint presentation consisted of an ariel tour from Bognor in West Sussex to Hastings in East Sussex to illustrate the diversity of Sussex Coastline. At various stages along the way the presentation looked at some examples of marine ecology – Shoreham Beach was one of the stop of places (which also gave a chance to introduce the following days ecology tour on the LNR). 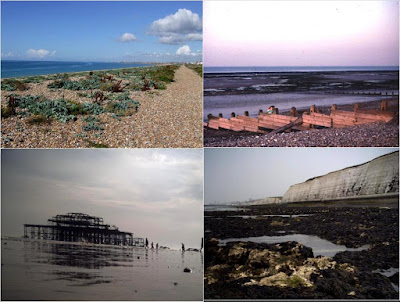 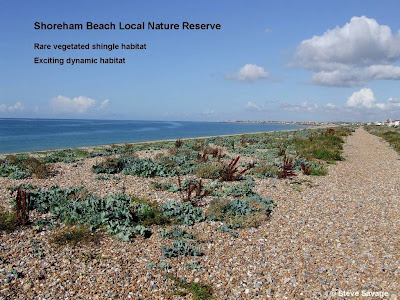 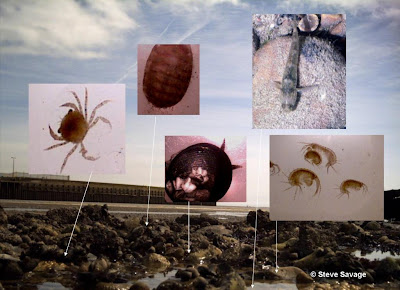 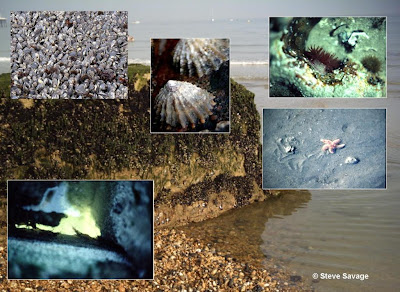 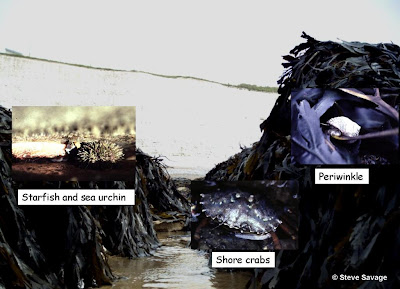 Rottingdean Beach
The presentation then looked very briefly at offshore marine wildlife, including sea mammals and ended with an overview of the how climate change (and other global issues) might impact on our local marine ecology (using local and global examples). 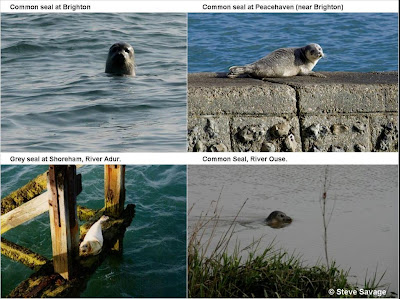 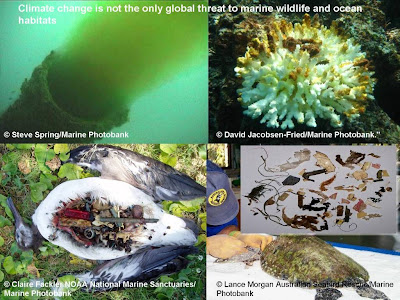 Examples of some of the globaconservation issues
I ended with the One World One Ocean mission statement from my project of the same name (basically illustrating how the oceans are part of our daily lives). 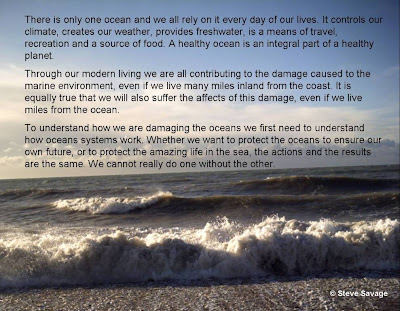 I was pleased to receive some very positive comments, both from the academics and general members of the public who attended.
In between speakers there was a chance to network and look at the various display stands. I also had a stand, One World One Ocean project focusing on the Adventures of Ed the Bear Project http://adventuresofedthebear.blogspot.com/ and other educational projects including the LNR Education Programme. 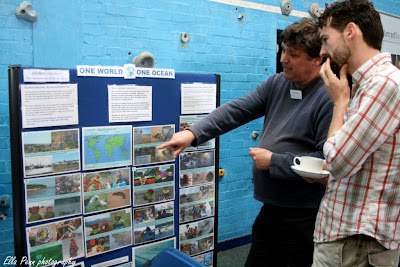 Me and my display stand
Posted by Steve Savage at 03:56 No comments:

I received a call late Friday evening of a dead dolphin in the river Adur at Shoreham. On close inspection I discovered that it was in fact a harbour porpoise. The porpoise was situated on the rather muddy bank of the river, about 100 metres north of the old Toll Bridge. 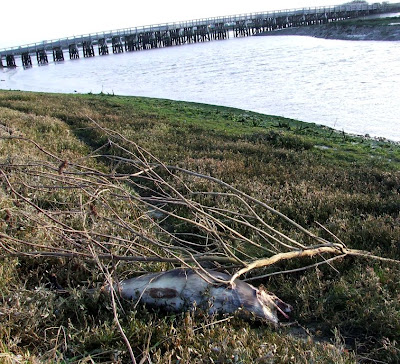 While the size and body shape seemed to indicate a harbour porpoise (it was in poor condition) the shape of the teeth confirmed it as a porpoise. Harbour porpoise have spade shaped teeth, rather than the pointed teeth that dolphins have. 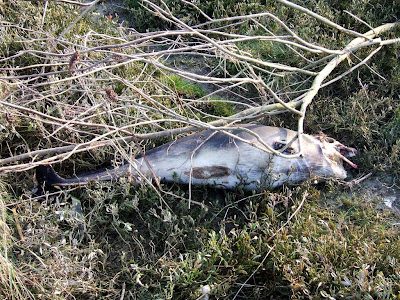 I was able to take pics, measurements and remove a tooth and have forwarded the information to the natural history museum who record and study all UK strandings of Cetaceans. The tooth can be used to age the animal, as cetacean teeth have growth rings similar to a tree.
Infact stranded whales and dolphins in England were once classed as "Royal Fish" and were the property of the crown. This has now been taken over by the Natural History Museum of London and it is a legal requirement that all dead strandings are reported to them. There was a very high tide yesterday and the animal may have been swept into the river – however it did appear to be quite fresh (no smell). The tide was rising fast and the animal was soon covered by the river water. A sad end to a beautiful animal
Posted by Steve Savage at 16:16 No comments: