Another seal is currently in the river ouse East Sussex.  It does not appear to be the usual 'Ouse Seal ' that regularly visits this river or Twinkle the rescued and released seal we have been following this year.

The seal was first reported to me on the 29th Nov and I received a message from British Divers Marine Life Rescue that they had attended the seal on 28th Nov. The seal is a little on the thin side.
Posted by Steve Savage at 06:47 1 comment:

A large group of bottlenose dolphins were reported 12 miles off Brighton. The sighting, that appeared on the news was made by Mr Lambert, who was fishing 12 miles off the Brighton coast when the dolphins appeared.

"I have seen dolphins four times off Brighton, and twice this year.

"These were the biggest dolphins I've seen off Brighton."

The dolphins played around the vessel occasionally leaping out of the water near the boat.

The group was said to contain 70 dolphins, even allowing for an over estimation (which is common) this was still a large group.

If you did not see it, below is a link to the ITV website 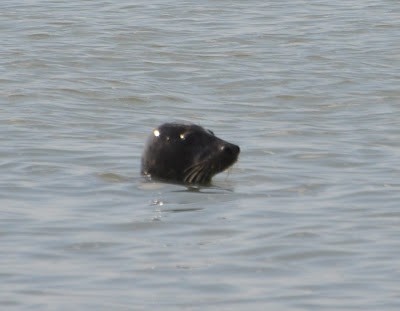 The seal was seen at 12.30 pm on Thursday 13th October and is almost certainly the same seal as reported nearby at Goring on 17th October. The seal was about 20 metres from the high tide off the beach at Rustington.
Posted by Steve Savage at 16:52