The last school visit before summer hols. Sadly after the sunny weather, the day of the visit was dull and drizzly however it did not dampen the enthusiasm of the children.

The visit was in two halves, the first focusing on the rock pools near the Shoreham Fort where the children explored the pools. A table and some trays where set up so the children could bring back some of the creatures they found and then I talked about the creatures in the trays which included juvenile shore crabs, blenny, shrimps, prawns and edible periwinkle.


The second part of the visit focused on the vegetated shingle as plants was one of the topics the children were learning about this term. I brought along a plant from his garden and asked the children that if he planted it on the beach would the plant survive. They said no. I then asked them why and the children listed lots of reasons such as no soil, no freshwater, sea spray, strong winds etc.

The shingle plants have adaptations that allow them to overcome the problems of living on the beach.
The children used an activity sheet to look for these special adaptations and then identified the plants using an ID guide sheet. The children did well despite the strong wind but unfortunately because of the weather they did not see any bees, butterflies or other invertebrates.


The children still had a great day and the teacher said the children had learned lots.
Posted by Steve Savage at 11:29 No comments:

Dolphin sightied off Shoreham and Brighton

A group of 8 or more dolphins were seen off the coast on Monday evening. They were close to shore, between 100 and 200 metres and were first seen off Shoreham beach.


The dolphins were later spotted by kayakers off Brighton, alerting people on the beach to their presence. The dolphins were very active and frequently seen leaping and twisting before splashing back into the sea.


The dolphins were too far from shore to make a definite identification. Most likely species is bottlenose dolphin, a costal species seen from time to time close to shore. Other possibility is common dolphins, a more deep water species but also seen near the coast locally on occasions. I have seen some video footage but the dolphins were too far out to make out much more than a rough shape.


I am hoping that someone out there has been able to photograph the dolphins and then it might be possible to confirm the species identification.

A seal was reported near Cooden Beach today in East Sussex.


The seal was first seen mid morning and stayed in the  area until about 1.30pm. The seal was 100-200m off shore and was diving, possibly searching for prey.

I participated again this year in the E.Y.E Project (Eco Young and Engaged) Eco Summit which this year was hosted by Shoreham Academy.


The E.Y.E. Project brings local schools together to focus on the importance of caring for our planet and to provide an additional opportunity for the young people within those schools to learn about environmental matters through fun and educational activities available at Eco-Summit events. The EYE project is made up of schools from Shoreham, Lancing and Worthing 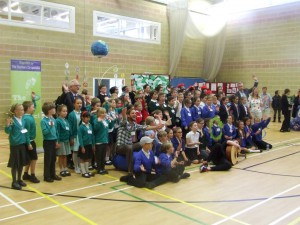 I has participated in the eco-summit on numerous occasions and this year I was asked to be the Key Note speaker. I started the keynote by talking about Shoreham Beach Local Nature Reserve, why it’s important and the role of the management group and the Friends of Shoreham Beach in caring for the reserve and engaging the public. 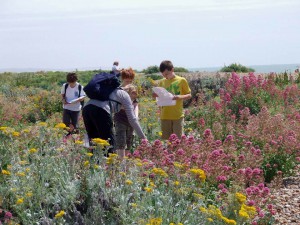 I also spoke about the educational opportunities on the reserve.


I then spoke about the adventures of Ed the Bear and how he has used Ed to create links with scientists around the world and to share their knowledge about the oceans. This includes the possible impact of climate change on Shoreham Beach as well as other issues.


I also ran three workshops during the day based around Ed the Bear. The first two focused on topics touched on in the keynote such as how oceans moderate our climate and weather; provide 50% of our oxygen, freshwater, food, new medicines and more. This was followed by an activity where the children took on the role of albatross to explore the dangers of plastic pollution to marine life. The third workshop was for secondary school pupils and explored the same issues but in a more scientific context.


During lunch and break I manned a stand and gave out the LNR leaflets and educational flyer. The day was a great success.
Posted by Steve Savage at 11:01 No comments: 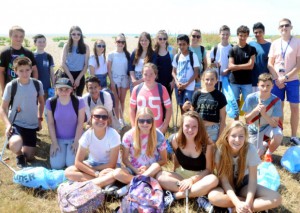 A group of students 11-14 years from Shoreham Academy undertook a beach clean on Shoreham Beach. Their teacher Mrs Firth said: “My form group wanted to give something back to the community. They have done a great job organising this themselves and it is so lovely to celebrate their integrity as young teenagers within their local community”.


A student Mia, 13, said: “Shoreham is such a nice place, you expect to see a nice beach but it is ruined by lots of litter. We just wanted to make it the nice place it is”. 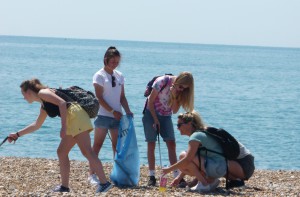 The students walked down from their school and collected a lot of rubbish at Ferry Road end of the beach before walking along to meet me and Chris at Shoreham Fort. Chris talked to the students about the importance of the nature reserve and the vegetated shingle and I spoke about the damage plastic does in the oceans to wildlife – which followed on from materials he had sent to the school prior to their beach clean.


As part of the beach clean, I organised a beach clean survey of a 200 m stretch of beach collecting and recording every item they collected which totally 436 items. This included 144 small pieces of plastic, 31 pieces of fishing line, 14 pieces of nylon rope, 19 plastic drink bottles and 9 plastic bags. They also found some unusual items such as a 4 way plug socket, a nappy, several cotton buds and a shot gun cartridge. 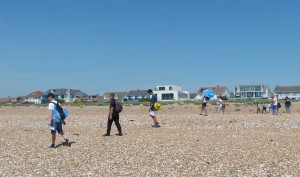 I finished the beach clean with a debrief about the items they had collected and where they may have come from. This included some items that had washed down river, including cotton buds, that are often flushed down toilets. Some items have been washed up from the sea but many items have been left behind by beach users and if we could stop this we would greatly reduce the debris on our beaches.


8 million tons of plastic find their way into the marine environment each year. While some animals can become entangled in plastic and some mistake plastic bags for their jellyfish prey a huge problem is the many tiny pieces of plastic that can be easily swallowed by a wide range of marine animals.


We ended with a look at some of the natural items that are washed up onto the beach, (from shark and ray egg cases to seashells and cuttlefish bone) and what they can tell us about the amazing animals that live off our coast.
Posted by Steve Savage at 10:56 No comments: