A common seal was hanging around just off the beach at Hove this morning, just opposite the Hove lagoon boating lake. The seal was slowly making its way eastwards towards Brighton.
Posted by Steve Savage at 11:10 1 comment:

Update on the tagged common seal reported in my previous blog. The seal has been identified by its unique number tag on its flipper. It is a male yearling, which has been named Twinkle.
The seal was taken to the RSPCA on the 13/6/10 from Lowestoft where it was rescued, weighing 21 kg. It was successfully released into the Wash on 18/8/10 weighing 35 kg.
Posted by Steve Savage at 09:32 No comments:

I received a very interesting report of a common seal (from David Harris and Stewart Page) on the gravel/mud bank of the Cuckmere River, on the east side about half mile in from the sea. The time was about 4.20pm. 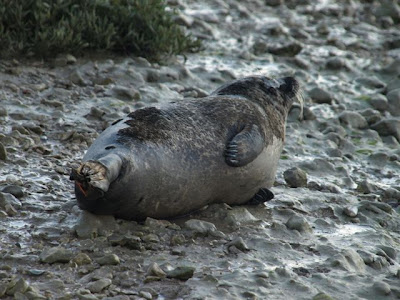 The seal was laying in a patch of sunlight, but the wind was cold, about 5 metres from the waters edge. It was clear from the photographs (taken by Stewart Page)  that this seal was not the common seal we see from time to time in the River Ouse. The seal appeared to be fit and healthy. It was holding a steady position with tail flippers together and slightly raised with those on its side flat. This is the usual resting position called the banana position because of its shape. 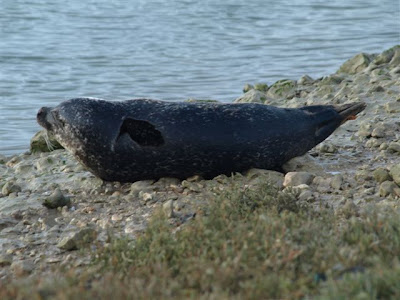 Of particular interest was the fact that the seal had a flipper tag and Stuart was able to get a clear photograph of the number. 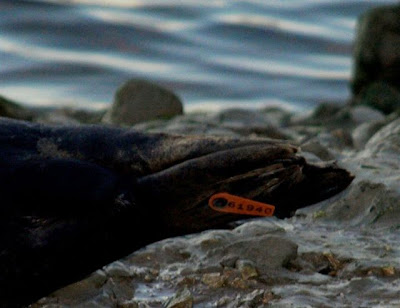 I am currently in the process of tracking down the originators of the tag and hope to find out more about its history.
The seal moved its head around but it did not appear to be too anxious and made no attempt to make for the water, which is a seals first instinct if it feels threatened. Stuart and David observed the seal for about 15 minutes before moving on when their border terrier noticed the seal was there. Seals appear not to be disturbed by dogs at a safe distance, but David was worried that the dog would rush down towards the seal.
Posted by Steve Savage at 12:11 6 comments: